UK music festivals resonate all around the world for both their innovative & creative design, plus their high hitting clout in capturing the very best, top of the game acts around, & a no fear attitude to give little known rising stars, high end stage slots, right alongside them.

Let’s have a look now at some of the best music festivals UK for 2019, the almighty Glastonbury, the iconic Isle of Wight & the thundering Download. There are a whole heap of others that should definitely be on your to see list in 2019.

Now lets get the lowdown on our chosen 3.

Glastonbury is the largest music and performing arts’ festival in the world. All the festivals that have come after it, try to emulate the experience. The difference is that Glastonbury has all the very best parts of what people want from a festival all in one amazing package, that gives the feeling that you are going to another country. 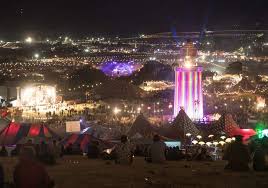 Just getting there involves a fai amount of travel, and a certain amount of queueing to get in but, when you get past these, you enter a huge canvas city. Of course all UK law still applies, but the rules are a little bit bespoke, a little bit more relaxed.

The Festival takes place in a beautiful location – 900 acres in the Vale of Avalon, an area steeped in symbolism & mythology and the site is ENORMOUS – more than a mile and a half across, with a perimeter of about eight and a half miles.

There are distinct socio-geographic areas across this huge festival site. The more
commercial aspects are around the Pyramid, Other and Silver Hayes, which are like Saturday night in Londons West end, but transported to a field. Unlike the West End, all visitors are on every guest list, to all the biggest gigs in town. 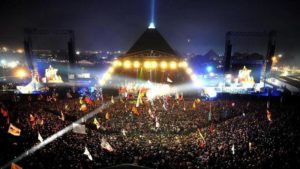 For the laid-back revellers, there are more relaxed & chilled out areas like the West Holts and Acoustic areas, which are all within an easy walking distance. There are also family oriented areas like the Kidzfield, the Theatre and Circus fields.

If these are still not relaxed enough for the completely horizontal festival goer & if you’re into the more alternative, you can always head up to the Field of Avalon, the Tipi Field, and the Green Fields. 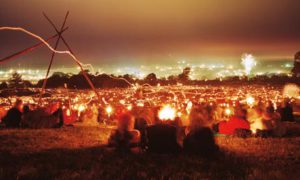 The Sacred Space – the stone circle, is at the top of the site & despite being a modern construction, it has already seen as much celebration and ceremony as some of its ancestors. Sunrise on a Sunday morning, with drums, torches and chanting from the sleepless revellers is a glorious
spectacle. Everyone is here to have their wild time, in their own way.

The Isle of Wight Festival is the first of the major UK music festivals summer calendar every year. The Festival’s origins date back over an extraordinary 6 decades.

Widely acknowledged at the time, as Europe’s equivalent of Woodstock. The Isle of Wight Festival began with a series of Festivals between 1968 and 1970.

In 1970 the line up included ; Jimi Hendrix, The Who, The Doors, Joni Mitchell, Supertramp, Leonard Cohen, Joan Baez, Chicago, Procol Harum (amongst others), and over 600,000 people attended the 5-day event.

There was no Isle of Wight Festival after 1970 as the sheer number of people attending the festival, was too much for the Island to cope with & so the Isle of Wight council band any gathering over 1500 people.

Then it all started again in 2002 – when, an established music promoter,John Giddings seized the opportunity to
re-launch it. John still curates every part of the Festival we enjoy
today. 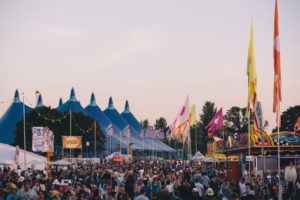 Quote from the organisers “Real music is our heritage and one we’re constantly building on. Like life, music constantly evolves and changes, and so do we. We’re a Festival for real music lovers of all ages and that’s why this year you’ll find and teen tickets and family-friendly areas as well as a raft of accommodation options for the non-campers and VIP services for those
who want to do a Festival, but not in the traditional way.”

The Isle of Wight itself enjoys a micro climate. The location is just 2 hours from London door to door ( give a bit for ferry waiting times), yet across the water, the Island provides a feeling of escapism that most other places struggle to achieve.

2002 the Ozzfest proved that there was an appetite for a new event at the Donnington Park venue & in 2003, the Download Festival was first conceived.

It is the biggest Rock & Metal festival in the UK. 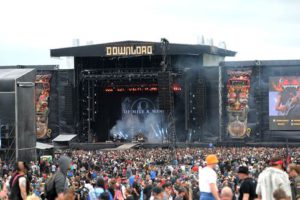 Originally a 2-day event with 2 stages, with Iron Maiden and Limp Bizkit booked as headliners. The weekend was packed with the best that rock had to offer, including Marilyn Manson, Audioslave, Disturbed, Ministry and many others. Way down on the bill, a little-known band The Darkness making one of their first festival appearances.

Download has continued play host to the largest rock and heavy metal bands, now across four stages. Throughout the years its spectacular line up’s have made history, with tens of thousands of loyal fans rocking out in Donington Park each year to the likes of AC/DC, Kiss, Metallica, Linkin Park, Black Sabbath, Slipknot, System Of A Down, The Prodigy and so many more.

Download 2019 will continue the trend, with Def Leopard playing Hysteria in its entirety. So it’s well worth getting a ticket just to see them.

When it comes to music festivals, all roads lead to the UK. Travellers from all around the world flock to this country to enjoy the very best global super stars of entertainment from the huge variety of music festivals UK.

While UK music festivals have become a staple during summertime, these events also gained a huge following even during the rainy season. In fact, in spite of weather changes, the music festivals held across the United Kingdom have been well attended. mostly by music, fashion and even beauty junkies! 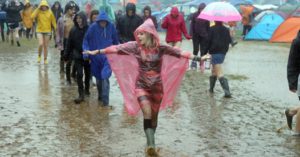 Great music played by your favourite artists, all live performances, outdoor fun, massive parties, some of the best food & all going on for days at a time. What’s not to love about music festivals UK ?